La Thuile was an amazing place to ride my enduro bike, we arrived on Friday night since the training was to start on Saturday according to the schedule. Apparently the tracks were open for training on Friday, which I wasn’t aware of, it was too bad I missed out on one day’s training. Well, I had really fun on Saturday’s training and I managed to do all stages one time and one extra run on the first stage. On Sunday it was race time and my main focus was to try to keep it smooth through all of the tracks. Stage one felt really good, I passed almost ten people on the way down though. Since this was my first enduro race abroad I had no rakning and therefor started way back in line. They start us riders with a 20 second interval and the track was almost eleven minutes long and it was really technical. On the second stage I had written in my notes from the day before that I could go much faster on the upper part of the track, obviously that did not work out because I got a flat at the end of the upper part. By then I knew the race was over in general but I decided to make the best of the situation and I still rode the last two stages as planned, focused but with a smile on my face 🙂
Here is the full result of the competition and some pictures from Linn Hollanti.
SS1: 34th 10:53
SS2: 324th 30:32 (puncture, would probably been 6:40 something)
SS3: 42th 10:16
SS4: 47th 10:17

My final result was 299th place but it would have been around 35th if I hadn´t had a puncture. 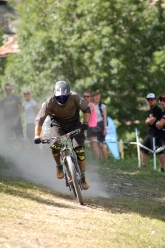