The first 4 weeks of the European trip Hampus and Adam is living with me in the bus and the first stop was the European downhill cup, Schladming.We arrived about five days before the competition so we had some extra days to practice on the track. Once the competition started on Friday I felt like I was riding fast and stable. Saturday came and I did some timed runs in the morning that felt good. My qualifying run felt like a good run and that put me in 40th position, just 1,5 second away from the top 30 (super final). Sunday came around and I was ready to pin it, by this time the track was really beaten up. There were more brake bumps and deeper ones so it was hard to keep the same pace as the days before. I thought I did a pretty strategic run but it was not good at all, I should have taken more risks because I got a worse time by 5 seconds. I got pushed back to 55th place. Not the result I was looking for, but at least it got me to think about my run and reflect a bit more than I usually do. I took my experience from this race and was looking forward to the next race. 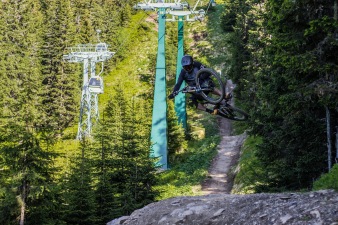 Next stop on the tour was Innsbruck, this time in the Crankworx cup. This is a cup that only has four competitions but they are worldwide so the standard is really high. The track was newly made just for this occasion and it looked really good. It was an all-natural trail that was really dusty and had big roots on the top, high speed sections in the middle and some tight turns in the end.  I was really stoked and I had so much fun training on the track. Three days of training passed and the track got really beaten up but it was still really fun to ride, it was a proper downhill track in my opinion. Usually there is a seeding run and one final run but this competition only had one final run and nothing more. The final run was on Saturday and I was prepared since I had did some timed runs earlier in the training sessions so I knew what I could do. I had a decent run in overall but I had two big mistakes that cost me some time, I miscalculated how dusty it was at two sections and had to brake real hard. I finished with a time of 3:04 and ended up at 37th place, about 14 seconds behind the winner, the current World champion Danny Hart.  I could have moved up in the result if I hadn’t made those mistakes but at least I did a proper race run at this race, and it paid of more than riding strategic so I am happy with the weekend.

Now we are at Brandnertal, Austria to compete in the german downhill cup this weekend and the track is looking really good! This time I am racing with the number one plate, that means that I am the best ranked rider at this race so the pressure is on.